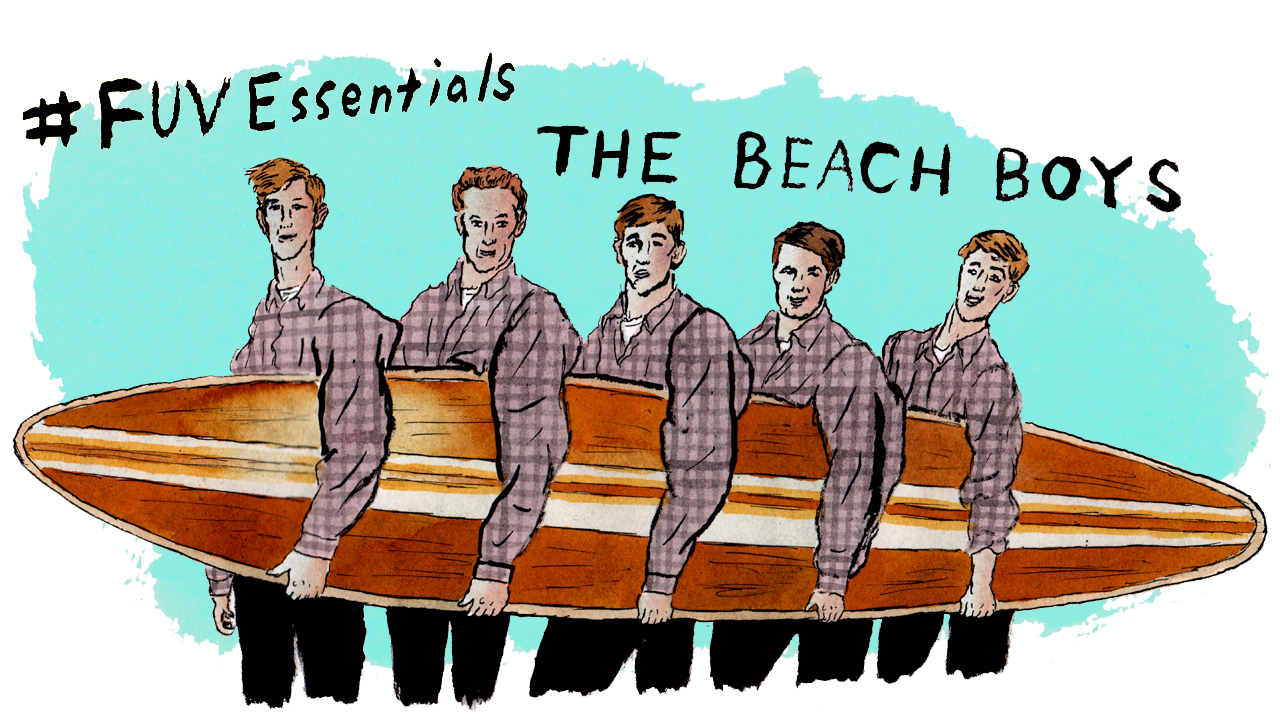 Do you feel like a long coastline drive with Endless Summer on an endless loop? Does your late summer cabin fever demand it? The Beach Boys are as good as seasonal music gets, this side of Christmas. And like holiday music, the Beach Boys‘ first great body of work seems pressed under glass, a fond thing of the past.

Folded and stored in drawers and cabinets, ready for refreshing when the occasion demands it, the early Beach Boys hits are like those ornaments that would never work as everyday decor. But step beyond their first Cali-coiff, pin-striped, surf-boarded era, to the murkier waters of second-act Beach Boys work. Then fast forward to today’s leading-edge rock music. The shimmering haunted harmonies of Fleet Foxes. The subtly nautical roll of Grizzly Bear’s songs. They’re unimagineable if the Beach Boys had not come first.

That some of the most commercially conceived pop music could evolve into the subtlety and abstraction of Pet Sounds, or Sunflower/Surf’s Up-era Beach Boys, or Brian Wilson‘s mid-life valedictory “Love And Mercy” is one of the great true stories of music. As is the long twisting trajectory of the Beach Boys’ life and career: their meteoric rise, fall from grace, reclaimed mojo, and dauntless survivorship. It’s as American as a story gets.

The Beach Boys’ early repertoire harped on formula to the point of cliché. But apart from the absolutely top flight performance — vocally from the brothers, that cousin, and the guy with the hat; musically by session legends such as the peerless Wrecking Crew — early Beach Boys was the first important example of assembly line music and image contained within a single group. A masterpiece of marketing, the breakout band was putty in the hands of their domineering stage dad, Murry Wilson, and their label Capitol Records. It was a master scheme: the Beach Boys were anchored to a mid-century Caucasian teen-dream of American good life which was blond, Californian and suburban middle class. If there were any rebellion or subversion in the Beach Boys vibe, it was “let’s have a good time spending our parents’ money.”

But then, the Beach Boys transcended themselves. The skill set they brought to the studio was formidable. While most rock and rollers of this early Sixites era grew out of folk, country, group harmony and R&B, the Beach Boys proffered the ultra-polish Hit Parade pop ensembles like the Four Lads, the Hi Los, and the Four Freshmen. It was decidedly not rock.

The group’s vocal discipline, the perfect pitch of Brian Wilson’s good ear, and a growing arsenal of inventive melodies and formula-busting songs would elevate the Beach Boys way beyond the squeaky clean image they sold on “The Ed Sullivan Show.” Their deepening of substance between 1964 and 1966 was a staggering achievement, bested only by the Beatles — their only and true rivals in this period (the Rolling Stones were still a couple of years away from becoming a force to be reckoned with). The sublime Pet Soundshails from this time, as does one of the most ambitious pop singles in all of music, “Good Vibrations.”

And then this happened: the Beach Boys, one of the biggest entertainment acts in the world, crashed and burned. The slow trickle of offbeat singles and half-baked album concepts (the beleaguered Smile) that the band squeezed out with increasing difficulty in the wake of Sgt Pepper’s Lonely Hearts Club Band hinted at the inner turmoil of Brian Wilson’s breakdown. The larger issue was the inability of the band to surf the wild waves of musical sea change that defined the late Sixties. “Surf’s Up,” declared an arty but ill-conceived song of this period, but the band wasn’t up to it. That’s where it gets interesting.

Under the auspices of their own Brother Records, and with the rest of “‘progressive” rock wildly out of control (if Brian supposedly went gray as a ghost upon hearing Sgt Pepper for the first time, what could he have made of Yes, Pink Floyd or Emerson Lake and Palmer?) the Beach Boys just did their own thing. They played with concepts, wrote idiosyncratic songs with the help of Van Dyke Parks, and quietly became an underappreciated and understated art band. As one standout track from this time suggests, the credo was “Sail On Sailor.” It’s this period that seems to reach out to our own time, influencing contemporary artists who may have learned to play on the chords and harmonies of “Fun Fun Fun,”“Surfin’ USA,” or “Help Me Rhonda,” but learned how to write studying the increasingly personal and ambitious songs of Pet Sounds through Sunflower/Surf’s Up, Holland and beyond.

The Beach Boys of yore occasionally resurfaced with force, as with their air-tight cover of Chuck Berry’s “Rock And Roll Music” in 1976. They pulled a similar hat-trick in the late ’80s with a turbo-charged revamp of John Phillips’ trade-windy ballad “Kokomo.” But by then, the band had lived several lifetimes, and suffered deaths in the family. Hellion drummer Dennis Wilson drowned in 1983. Cancer claimed angel-voiced Carl Wilson in 1998. Brian was out, in, out again. Mike Love wrangled with one and all, and became the defacto lead voice of the band. The internal squabbles through the years made Fleetwood Mac look like a campfire Kumbaya sing-along.

Taken in as a nearly 60-year-old entity, you could see the Beach Boys solely as an oldies juggernaut, mired in backbiting, appalling politics, and opportunism. But why spoil the sheer fun of indulging in some of the sweetest music this side of heaven, even if it was forged under sour circumstances? Just cherry pick through the many ages and phases of this indefatigable band. Sing along with the sunshine hits on a summer jaunt. Get in touch with the winter of your soul through the timeless “God Only Knows,” “I’m Waiting For The Day,” or “I Just Wasn’t Made For These Times.” Let the cinematic scope of Holland‘s “California Saga” sweep you away. For every “California Girls” karaoke sing-along there’s a lost gem like “Tears In The Morning” awaiting your discovery.

To borrow a phrase usually associated with the Velvet Underground, the deep cuts of The Beach Boys may not have sold a lot, but those who bought them went and formed bands. Ahead of “Brian Wilson Presents Pet Sounds: The Final Performances” at Radio City Music Hall on September 23, the Beach Boys and Wilson are this week’s FUV Essentials.